Welding Everything Except Broken Hearts

Memorial Day recognizes veterans who made the ultimate sacrifice. Those who lost their lives defending freedom around the world and throughout history. Hero’s Bridge salutes every veteran who did not make it home.

We also salute their family members.

Many veterans who did make it home did not return the same person. Some suffered physical injuries, some emotional ones, and others were exposed to things that lay dormant and quiet in their bodies only to surface later as a terminal condition. 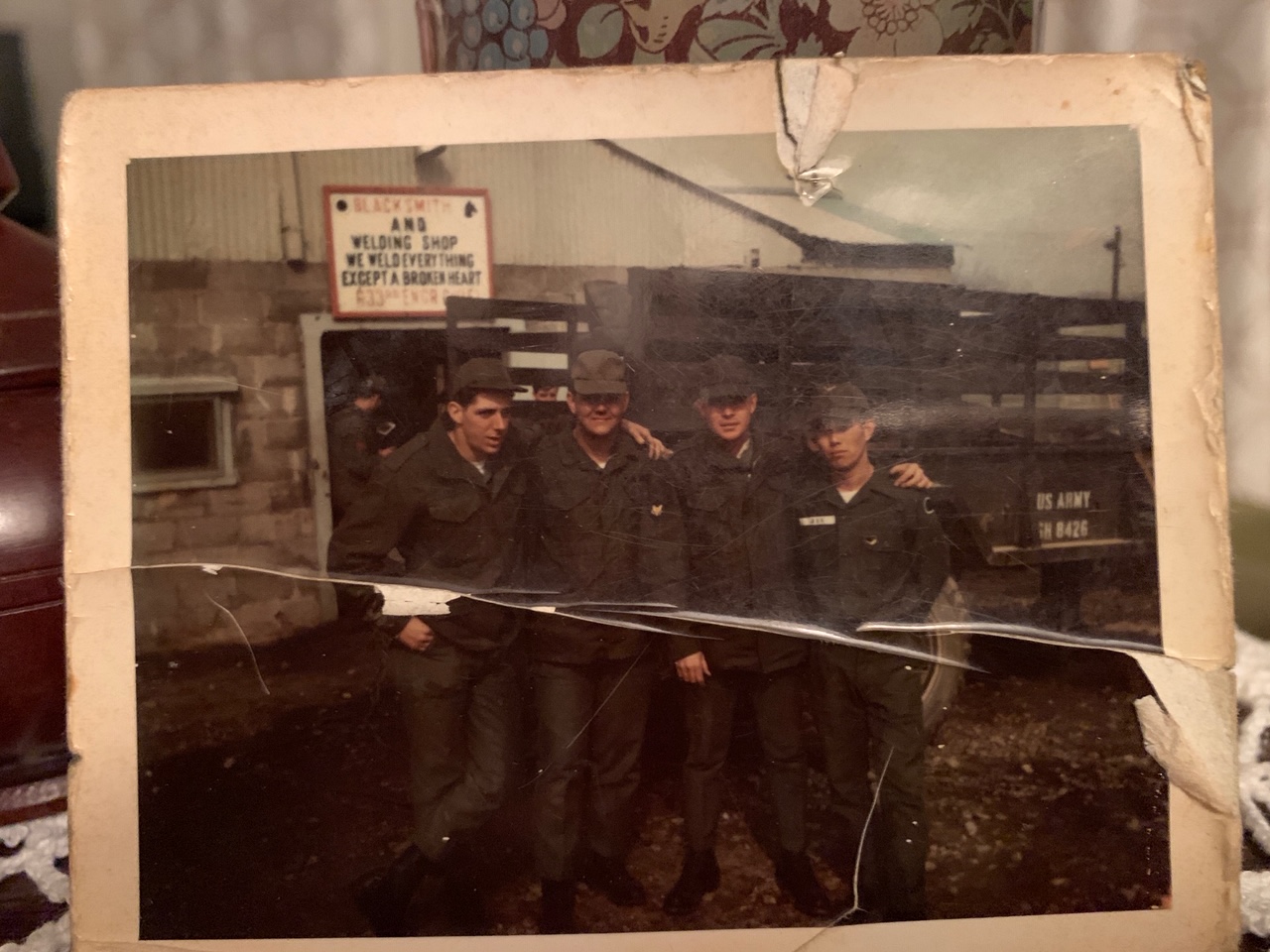 Robert Crusoe Banks Jr. is one such veteran. He enlisted in the Army at age 21 and was sent to Korea on April 4, 1967. He remained there until May 2, 1968. In this photo he stands second from right with three members of his Corps. The sign in the background reads Blacksmith and Welding Shop. We weld everything except a broken heart.

His military career ended when he returned home, and by 1978 he was married with a daughter, Shanna.

Shanna’s memories of her father are mostly positive. “My dad was very charismatic. He lit up a room and people were drawn to him. His smile was amazing, and he loved to laugh. He never had much to say about his time in the military.” Shanna was a big daddy’s girl and was devastated when he passed away at only 47 years old.

Shanna’s father died from liver and kidney failure, attributed to his heavy drinking. But perhaps exacerbated by his time overseas. While he was in Korea, herbicides were sprayed to kill vegetation. Herbicides including agent orange.

Now with a family of her own, Shanna’s interest in her father’s service grew, “I had his uniforms and paperwork, but no stories. I didn’t know anything about his service.” She turned to the internet where she found the Korean War project website and a group for her father’s company. She sent a message to the group’s contact.

Her message was simply a collection of facts that she had about his service.

Less than an hour later, Shanna received a reply:

Yes, I remember him well. Before I opened my yearbook, I could picture him.  He was there at the same time as me. I called him Bob or Banksie. I don’t remember which piece of equipment he operated. I was a grader operator. I believe we made rank together because we were there at the same time period. Did he speak of TDY to the DMZ? 633 was located at Camp Stanley east of Uijongbu near the village of Song-san. Judging from the Google-maps of the area it is nothing like it was when we were there. I included his pic and mine from the yearbook. I also looked through my photos to see if he was in them, but wasn’t. What did he do after the service? I went into the computer field and became an electrical engineer. Mostly retired now. He passed fairly young. I enjoyed hearing from you. My condolences. – David V.

And suddenly, her father who had been gone for nearly three decades was given life through a man who knew him when.

For the family members of our veterans, those who passed young and those who passed old, the questions always remain. There is a longing to connect with anyone who knew them during their time in service. Their time before their injuries and exposure to chemicals that lead to later ailments.

Shanna knew that the end of his life was very painful while he endured his illness. For her it was comforting to meet someone who confirmed her memories of her father. A man who always helped others regardless of his own situation and wanted to make other people better when the worst got them down.

The email exchange validated Shanna’s cherished memories of her father who was claimed far too young as a result of his time overseas.

This Memorial Day, we offer comfort to every family member that lost a piece of someone they love during their time in service.