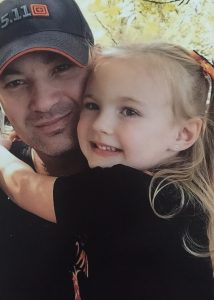 Hero’s Bridge is proud to welcome Andy Winn to the Battle Buddy team. Andy and his family recently relocated to Warrenton from Culpeper. He now enjoys the shorter commute to Fairfax where he works as a Deputy Sheriff, as well as being able to spend more time with his family. Andy joined the Fairfax County Sheriff’s Office in 2008 after serving 12 years in the U.S. Marines Corps. Andy’s commitment to service and protecting others is evident as he has proudly worn a uniform his entire adult life – first as a Marine and now a public servant.

Military service runs deep in the Winn family. Both his maternal and paternal grandfathers proudly served. One of Andy’s fondest memories growing up was listening to his Grandfather talk about how he trained horses for the military and showing off his saddle branded with U.S. Calvary. Andy’s father was drafted into the U.S. Army during the Vietnam War and his Aunt retired as a Sergeant Major after over 20 years of active duty. His younger brother also proudly wore a military uniform, serving in the U.S. Army, where he met his wife, who is recently retired. During one of Andy’s many deployments to Iraq in support of Operation Iraqi Freedom, as he was heading in, his brother was heading out.

Prior to his move to Warrenton, Andy wanted to find a way to give back and get more involved in supporting the Veteran community. While doing some research on the local VFW, Andy came across Hero’s Bridge. He recognizes that not many aging veterans have family and he wanted to help. “Our aging Veterans are too often the forgotten heroes. Military personnel receive way more support today then what was provided to our older Veterans, some whom still struggle with the many demons of war. They are often overlooked, it’s awful.” Andy too has struggled with dark times post military service. “I have a great support system with my wife and family, however helping other Veterans in turn helps me as well. I get just as much out of these relationships, as those I am helping. It’s another kind of family.”

Andy was recently been paired with Clifford Timchak, a U.S. Army veteran who was stationed in South Vietnam in the late 60s with the 91st Engineer Battalion, where he drove a deuce and a half. Clifford recently relocated to Front Royal and benefited from Hero’s Bridge Corps of Engineers who assisted with the move. Clifford is very appreciative of the support he has received from the organization and looks forward to getting to know Andy over the coming months.

For Andy, he is appreciative of the gratitude people show him, however to him the heroes are the hundreds of thousands of service men and women who never made it home. “We can never forget those that have laid their lives down protecting our freedom, and the brothers and sisters who served and continue to serve our country.”