Thousands of miles to better housing for aging veterans 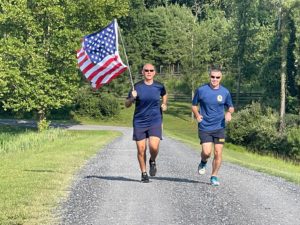 On Dec. 5, Rick Heppard and Bobby Brooks, better known as Running for Heroes, will run the 2021 EOD Warrior Holiday Dash 7K, Half and Full Marathon on the Chesapeake & Ohio Canal in D.C. It will be their 12th marathon this calendar year.

They laced up in 20-degree weather on Jan. 31, to run their first of 12 marathons on snow-covered trails to raise money and awareness for aging veteran housing needs and the Hero’s Bridge Village. The village will be a community of tiny homes that Hero’s Bridge — a support organization for elderly veterans — is planning to build for the area’s most marginalized veterans. Read the full story.

Hero’s Bridge Village, a project conceived by Hero’s Bridge of Warrenton, will be a community of tiny homes for the area’s most marginalized veterans. A Hero’s Bridge spokesman explained, “Here veterans will receive the care and attention they need to enjoy their twilight years, in comfort beside their brothers and sisters in arms.”

Hero’s Bridge Village will be a first of its kind tiny home community that will debut in Fauquier County. “It will lift our aging veterans out of substandard living conditions, homelessness and social isolation into a home within a gated community,” the spokesman added. A location for the village has not been chosen.

All donations made to Running for Heroes will be used toward building the Hero’s Bridge Village.

These are some of the veterans that could benefit from Hero’s Bridge Village.

Doyne, a Vietnam veteran, fears dying alone, and his body not being discovered for some time. He is equally concerned about his small dog, Porkchop, if something were to happen to him.

Mike, also a Vietnam veteran, has plumbing that freezes each winter, leaving him without water. Plastic sheets hang from doorways to trap the heat during the coldest days of the winter. His doublewide trailer is infested with bedbugs, roaches and other insects.

Charlie, another Vietnam veteran, lived on the street near Washington, D.C. because he couldn’t find accommodations willing to accept a veteran voucher. Once he found housing, he slept on the floor because he was unable to afford any furniture or household items. Sadly, Charlie died on Oct. 8. His dream of being one of the first veterans to move into the Village died with him.