Virginia Americans in Wartime Museum (NMAW) has dedicated itself to military history: “The Museum serves to educate the public, especially young people, by telling individual stories of personal experience, realities of war, and sacrifices made by Americans striving to preserve our freedoms.” 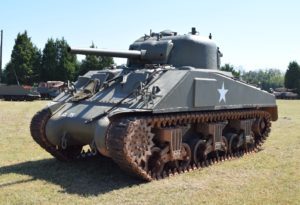 In 2001, the first Tank Farm open house was launched and each year since its debut the tradition has continued for the public to interact with both military history and equipment. This year’s two-day open house will be held on September 22 and 23, 2018, and will feature many “toys” for history buffs to enjoy.

“The Tank Farm is like a Disney World for history and/or military buffs. There are various pieces of equipment used across several wars and conflicts available to see, and a tremendous number of period actors —  decked out in the uniforms throughout the history of our country,” said Hero’s Bridge co-founder Dave Benhoff, LtCol USMC (ret.) “There was a even a cavalry troop there last year, as well as a Marine LAV (Light Armored Vehicle) — complete with troops from Quantico.  It really is fun for the whole family, and has a huge turnout.”

NWAW stated, “We have many features and events planned that include a demonstration by the United States Marine Corps Historical Society, combat historian and author Patrick O’Donnell will deliver the keynote speech on Saturday about WWI, flamethrower demonstrations, Semper K9 demos, veteran interviews conducted on site by the Voices of Freedom Project and much more.  And of course there will be tons of tanks (pun intended) and armored vehicles. ”

Hero’s Bridge encourages families in the region to visit the event and to explore the amazing displays. Stop by Hero’s Bridge table either day to learn more about the programs we offer older veterans. For more information on this two-day open house, visit NMAW’s website. For directions click here.