An article in the local newspaper prompted this local to share his insight about his time in the Navy. 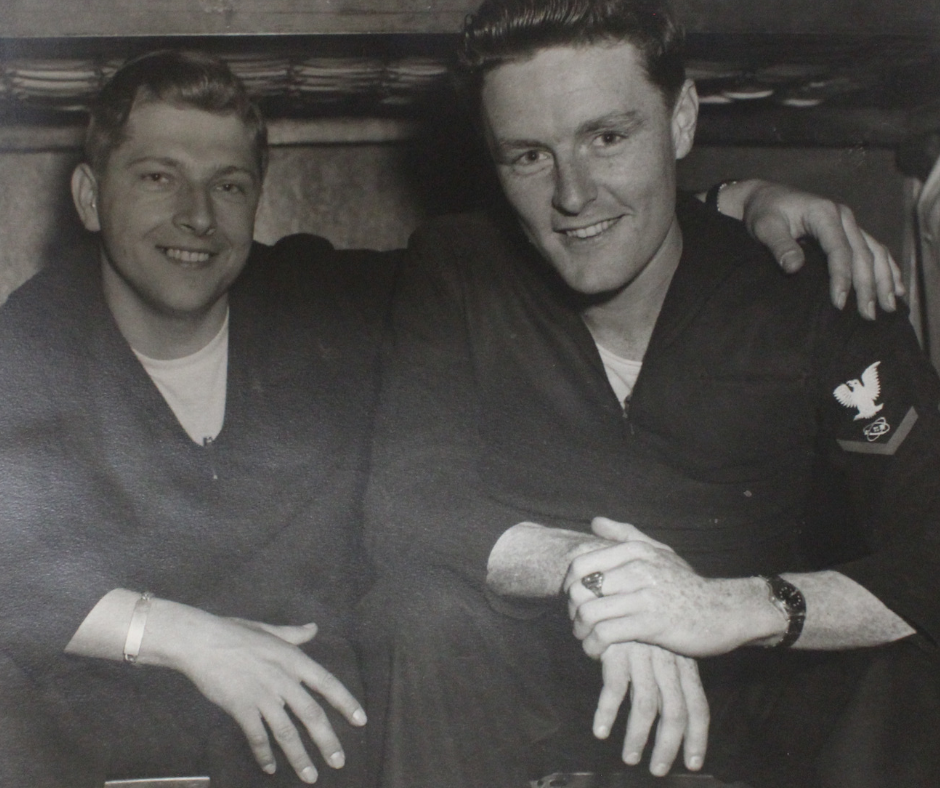 On December 6, 2018, Bruce Campbell Warrenton VFW Post member and Hero’s Bridge (HB) volunteer and Debbie Eisele, Community Outreach Coordinator met with Mr. King for the first time. Mr. King’s daughter initially contacted Hero’s Bridge and said he was interested in participating in HB’s Honor Guard program and recording his oral history for submission to the Library of Congress Veterans History Project. From there, the wheels were set in motion and an initial meeting occurred which divulged a multitude of insight from a man who to this day is glad he served his country and followed the path he chose.

Mr. John E. King, served in the US Navy  and he enlisted right out of high school in 1951. Entering as a Seaman Recruit, King attended his basic training in San Diego prior to shipping out on his first assignment. Throughout his Naval career, King’s experience led him to become an accomplished ET (Electronics Technician) who believes the benefits of serving one’s country provided him with an education and experience only the Navy could provide him.

King served on board USS Saint Paul (CA-73), USS Ray (SSR-271), and USS Sea Leopard (SS-483). He went to Korea and also visited Yokosuka and Tokyo, Japan during his time in service. When he entered the Navy he was rated Seaman Apprentice, and over time earned the rating of Fire Control Technician 3rd Class as well as Petty Officer Second Class Electronics Technician. 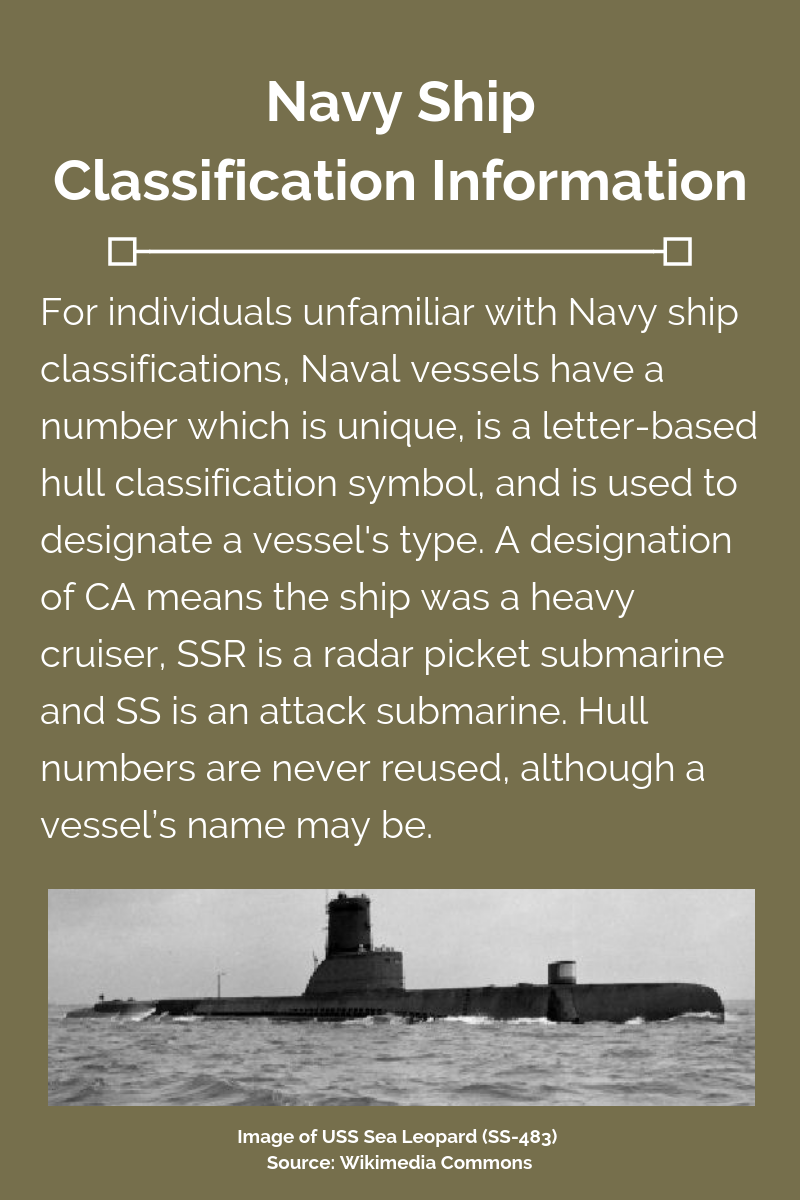 Throughout his active duty, King served on a cruiser, and attended submarine school in New London, Connecticut. During his time on board the heavy cruiser USS Saint Paul (CA-73), there was a horrific accident. To this day the events of that incident are etched in his memory and still invoke a very strong emotion when he detailed what transpired.

King explained on that particular day, a terrible accident occurred on the USS Saint Paul during a firing mission off the coast of Korea and 30 sailors died. “When you fire eight inch projectals — each gun is isolated by steel bulkheads  — you open the breach, look up the barrel and yell ‘bore clear’ if it is clean. Then you load, close the breach and fire,” King explained. “The bore apparently wasn’t clear when they loaded the projectile and black powder into the gun barrel and the ignition of the powder flash killed the three men in the gun room, plus smoke inhalation from the burning black powder killed all the sailors in the turret #1 — the entire gun crew of 30 men, King said.

“When I attempted to go to turret #2 they were bringing the gun crew out of turret #1 where the accident occured. They laid their bodies on the deck.  I remember they asked me and several others of us standing by to perform artificial respiration,” King said emotionally. “But we had no success.”

Later King transitioned from serving on the cruiser to submarines, and the incident on board the USS St. Paul didn’t deter him. He was never concerned about submersion issues as the specialized submarine training included active simulations on what to do if escape was necessary. Training included participants having to find their way from the depths of a silo filled with water to the surface. “I soon learned that I didn’t have positive buoyancy, that most people have,” said King. “They really teach you well.”

King enjoyed his new assignment, more so than the on cruisers or surface ships. “I really liked the subs. There are only 80 crew members on board, where there were about 1,300 onboard the heavy cruiser. On the cruiser there are some sections of the ship I never even saw and didn’t know everyone. On subs you know everything about the crew and the sub. You ARE family.” 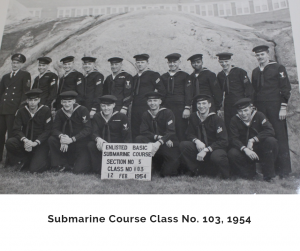 Life on the submarine was good according to King. He explained the Navy had a food budget per man which worked out well for those on a sub. “The larger per man budget on submarines allowed us to eat better than people on the cruisers or surface craft,” said King with a smile. “Steak was more frequent and offered in large platters of medium, well done and rare. We helped ourselves — family style — I really liked that. It was very good food.”

King finished his service after four years. “The Captain tried to convince me to shipover. I liked the Navy and subs, but I had other plans with the GI Bill now available,” he shared. Although there was a bonus offered if he chose to shipover, he knew it was time to depart and start a new career.

King admitted while he was in high school he had no specific career plans, but the Navy helped him find his focus and career path. King recalled a particular visit from a General Electric representative on board one day; this visit was instrumental in determining King’s future career path. “This Electrical Engineer came [on board] to examine and inspect equipment for possible repair or replacement. I discovered through working with him I wanted to be an electrical engineer; I wanted his job.” From that time on King aspired to reach his goal. 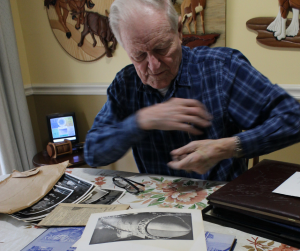 Mr. King shared images with Bruce Campbell while sharing his story. Behind Mr. King are pieces of art he created from exotic wood.

“The Navy got me motivated and into what I wanted to do,” he said. After leaving the Navy, King went to college and graduated with an electrical engineering degree. He felt his time in the Navy definitely helped him reach that level of success. He wants younger generations to know he went into service because it was a smart thing for him to do because of the GI Bill. He was now able to afford his education and enter into a successful career.

Once he was out of the Navy, King worked initially for GE, then for IBM where he worked on the start of the Saturn Apollo Spacecraft Program in Huntsville, Alabama for eight years. From there King moved to Gaithersburg, Marland to work with IBM on a Satellite program; then to Manassas, Virginia to work on the start of the Trident Submarine Sonar System Program for the US Navy.

King moved to Warrenton, Virginia in 1973 with his wife, son, and daughter. When he retired, he remained here in the same home he and his wife shared. He remains active in the community as well as at home. Although his wife has passed, Mr. King spends time regularly with his daughter Diane King, a retired medical doctor who now spends time volunteering at the Fauquier Free Clinic.  His son, Mark King, very sadly passed away this summer from cancer. 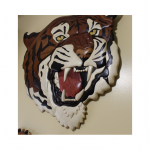 This tiger art is one of many of the pieces Mr. King has created.

Additionally, Mr. King is an incredibly talented artist specializing in wood — from furniture to creative art pieces. “I love woodworking. I made furniture for a while, then moved on to creating segmented bowls, but grew tired of that and learned about this technique called ‘Intarsia’ which involves using exotic wood.” King is currently working on a half-scaled standing elk, which he will add to his collection of over 28 hand-crafted pieces of Intarsia art.

“Recording Mr. King’s history has been a wonderful experience,” said Hero’s Bridge volunteer and Warrenton VFW member, Bruce Campbell. King’s recordings will be submitted to the Veterans History Project in the very near future. He has served his country and family well and in the near future, Hero’s Bridge hopes Mr. King’s recordings will be available online for the public to listen to through the Library of Congress website. 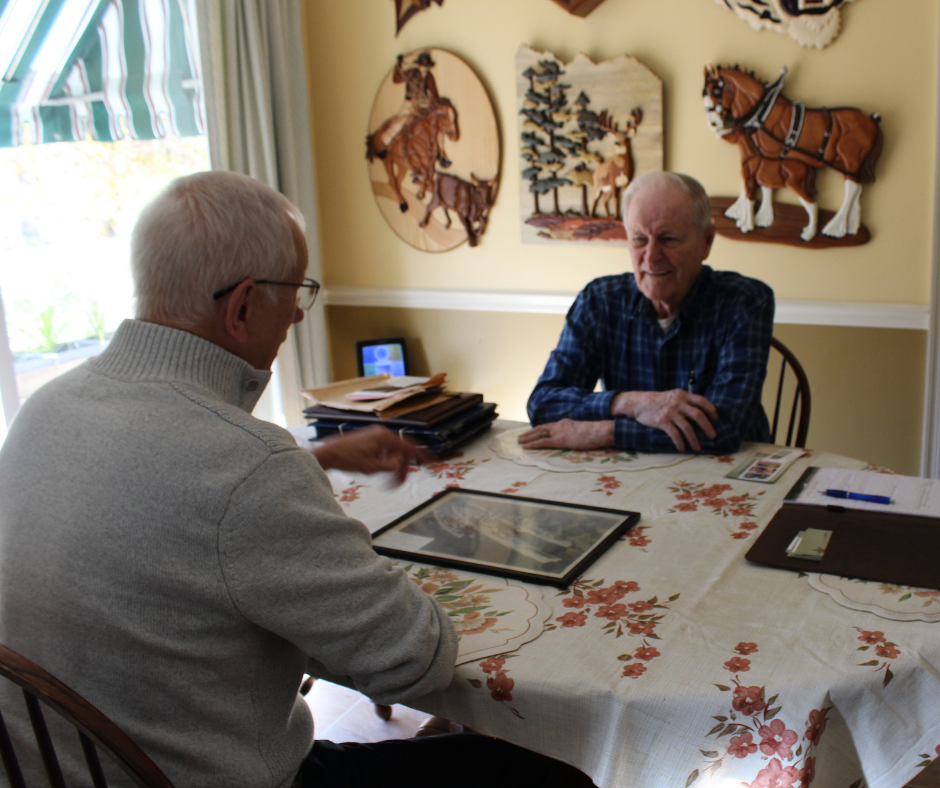 Bruce Campbell, HB volunteer and Warrenton VFW member, meets with Mr. King to discuss the oral history recording process. Behind Mr. King is a wall decorated with woodworking he has created.