Hero’s Bridge Connects Elderly Veterans With Care: For Molly Brooks, making sure older veterans are looked after is personal 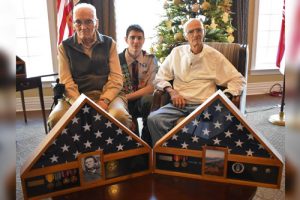 Molly Brooks wasn’t at her father’s side when he died in 2016.

It’s a memory that continues to haunt her.

A 23-year career military retiree and Vietnam veteran, Raymond Gustin USMC, MSgt, suffered from the effects of Agent Orange exposure. He was 71 when he went to sleep for the last time in one of his favorite recliners.

“I never got to say goodbye … I never got to thank him for his service to this country, his dedication, how much it meant to me,” she said during a recent interview.

That same year, Brooks launched Hero’s Bridge, a nonprofit organization specializing in providing services to elderly veterans, particularly those who are at higher risk for experiencing various diseases and disorders as a result of their service.

This year marks their five-year anniversary and Brooks remains energized and more motivated than ever to continue her mission.

“Five years ago, I decided to do something about all the older veterans struggling in so many ways,” said Brooks, who remains forever grateful for those who have shared her vision. Read the full article in The Epoch Times.