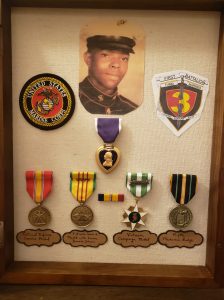 73-year-old Vietnam veteran John Bolden considers himself lucky to have been shot at his basecamp. He was walking to the mess hall when he was shot in the right thigh. He was told it was a Viet Cong sniper, but he thinks it was a stray bullet from the firefighting about a quarter of a mile away.

According to John, soldiers were sometimes safer in the jungle then they were at basecamp. “At least in the jungle we knew where the shots were coming from. On base all we could do was sprint for the nearest bunker,” he recalled.

After being shot, while he lay in a hospital bed recovering from the bullet wound, his basecamp was destroyed during the TET offensive  —  a massive, multi-city/village, coordinated attack by the North Vietnamese on the most important holiday on the Vietnamese calendar, a day that until 1968 had been a cease fire.

John thought he would be sent home after he was shot but to his surprise, they sent him back to base. “I remember flying back in to base camp in the chopper. Everything was destroyed. It looked like a tornado had passed through. The only thing that remained intact was the music hall that had sandbags piled up high against it.” 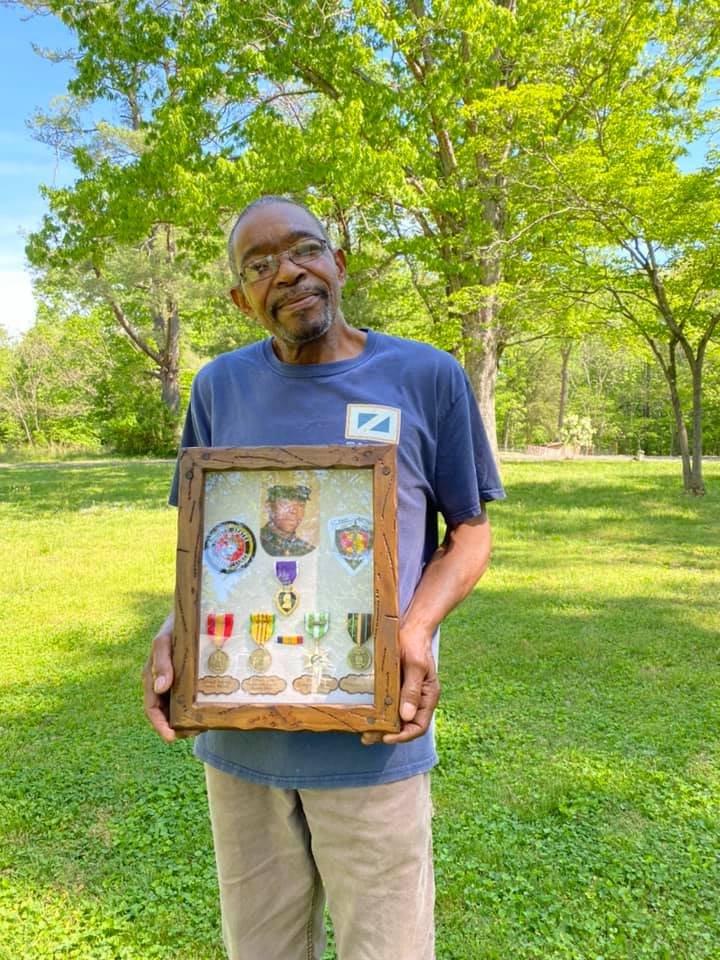 John was awarded the Purple Heart for the injuries he suffered during the war along with other medals and ribbons. Then, in 1975 a few years after his military career ended, while at his mother’s house a friend commented on the weight of his Purple Heart medal.

John jokingly told the friend that the heart was made of pure gold to explain its weight. Later that day, when John went to put his metals away, he found them all stolen.

Fast Forward 50 Years
One warm May day in 2021, John stood the beneath mature trees on the property where he and his wife of 43 years raised their three daughters and two sons. The wind blew through the young spring leaves while a rooster crowed on a nearby farm.

Nearly 50 years had passed since John left the military when he welcomed Molly Brooks, director of Hero’s Bridge, who gifted John a shadow box with his replaced medals. In the center of the box was a copy of his military portrait; taken when he was a fresh-faced 18-year-old Marine enlistee.

John’s Story
At age 16, John tired of waking at 5 am to milk cows on the family farm. He saved his money and took a train to Washington, D.C. where he stayed with his aunts. After a few months he found a job but was still pressured to do more. “I enlisted just a few days before I turned 18,” he said. He then returned to the family farm near Orange to tell his parents. “They couldn’t believe I had done it with the Vietnam War happening,” he shared.

He was sent to Parris Island for Boot Camp and Camp LeJeune for training. He spent 2 ½ months in Okinawa before finding himself in Vietnam.

In Vietnam, his job was to manage incoming and outgoing choppers. Some brought in supplies, others transported the wounded to hospitals. Some never made it. “The supply choppers were targets. Sometimes they never arrived, and we just saw a big ball of fire in the sky,” he recalled. John sent more than one wounded comrade on a chopper out of Vietnam.

The trauma that he endured during his time in Vietnam persisted throughout his life along with chronic pain from the gunshot wound he sustained.

He confesses that when he returned from war, he wasn’t the same person as the young man in that portrait. He could no longer tolerate crowds, lost friends easily, and often needed to do a perimeter check when he entered new surroundings.

His post-war trauma became so bad that John felt he needed to wear sign that read, “Speak to me before you approach me.” For John, being caught unaware of someone’s presence caused him to defend himself and attack the person approaching him.

As a result of his reaction, John prefers to spend time alone. He used to hunt but he found that walking through the woods with weapons brought back too many painful memories and frightening reactions. Today, he spends his time fishing alone.

All of these things made relating to others, especially in the workplace a constant challenge. This was very common for many Vietnam veterans in the 70’s and 80’s. PTSD was not recognized at that time and others often just thought they were ‘difficult’. He held many jobs over the years and most recently left work as a knife grinder in Orange. He was employed there for 15 years and left because of leg pain from his old war wound.

John has lived a blessed life. He feels lucky to have lived as long as he has. He has a large extended family with grandchildren that live nearby. He takes great pride in all he has overcome and accomplished over the years. And yet, even as he approaches his sunset years, he feels compelled to get up from his sofa, mute his TV, and do a perimeter check before he can settle in for the evening.