Continues to serve his country through volunteer efforts in the community

Hero’s Bridge volunteer Bruce Campbell is a retired Captain USNR and has been actively involved in both the Battle Buddy and Honor Guard programs. Bruce served in the Navy from June 1970 to July 2000, and was the recipient of multiple awards (see image for complete listing), including two Meritorious Service Medals and three Navy Commendation Medals. 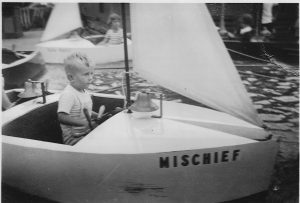 In the 1960s, Bruce said it was common for high school students to expect to serve; either planned or through the draft. “Most of us had expectations to serve because fathers and other relatives served in World War II,” he said.

“While my Dad was an Army veteran of the European Theater, my uncles were Navy vets of the Pacific,” Bruce shared. “During the war, one of my uncles had advanced from seaman to Chief Petty Officer and he credited his Navy experiences, followed by a college education under the GI Bill, as the foundation of his later success.”

Bruce recalled the impact of one particular speech given by President Kennedy when the President said: “I can imagine a no more rewarding career. And any man who may be asked in this century what he did to make his life worthwhile, I think can respond with a good deal of pride and satisfaction, ‘I served in the United States Navy.’”

Bruce to competed for the Navy ROTC program for which he was ultimately selected. He said, “This enabled an excellent government-paid college education and a path to commissioning as a Navy Officer.” 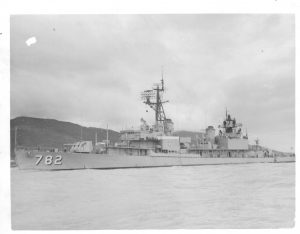 Bruce served in the Vietnam War from 1970 through 1972 aboard the destroyer USS Rowan (DD-782)as the Electronics Material Officer and Electronics Warfare Officer. “While I was aboard the Rowan, she was based in Yokosuka, Japan and executed various Vietnam combat operations including those with a carrier at Yankee Station, coastal surveillance and interdiction operations, naval gunfire strikes against targets in North Vietnam and gunline operations in the South,” said Bruce.

The phrase “Join the Navy and see the world” took on meaning for Bruce. From his roots in New England to active duty in San Diego to the western Pacific, his travels provided him an opportunity to serve and see the world: “Sea duty on destroyers was a tough and exciting life that cultivated close relationships among a small team of officers and the crew.”

Initially, Bruce did not intend to serve long in the Navy, but found as the end of each assignment approached, he was exposed to new and interesting opportunities which he accepted time and again. 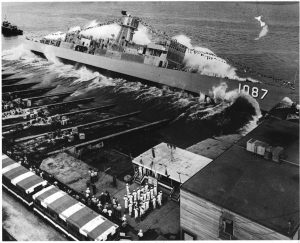 1972 launch of USS Kirk at Avondale Shipyard (photo courtesy of B. Campbell)

“After the Rowan and Vietnam, I was assigned to the commissioning crew for a new frigate USS Kirk (FF-1089), from launching at Pascagoula, MS through its first operational deployment,” shared Bruce.

“Then I was off on a tour at sea in Europe as the US Navy representative on a multinational NATO destroyer squadron staff. After that, I went on to postgraduate school to obtain a M.S. in Electrical Engineering”, then two sea tours as weapons officer on USS Jesse L Brown (FF-1089) and as chief engineer on USS Guam (LPH-9). These tours included deployments to South America, West Africa, the North Atlantic and Mediterranean.

For Bruce, the Navy kept life interesting with each set of orders. However, at almost the 15-year mark, a new program in the Naval Reserve caught his interest. “In part due to the considerations of having a young family, I felt it was time for a change,” he said.

This change was the Naval Reserve Engineering Duty Officer Program. “That was a perfect fit for me due to my technical education and experience from variety of shipboard tours,” said Bruce. This was also around the same time President Reagan began military expansion which included a new class of destroyers, according to Bruce. 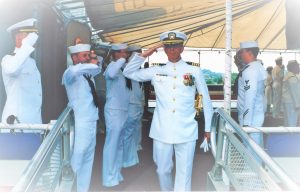 Last day of service, 2000, piped over the side on USS Dupont (photo courtesy of B. Campbell)

“So I transitioned to the defense industry and accepted a position at Raytheon as a systems engineer on the DDG-51 design team,” shared Bruce. “Both the Navy Reserve and Raytheon provided continually varying and interesting careers until I retired from the Navy in July 2000 and from Raytheon in May 2015.”

Bruce shared, “Just as my uncle had experienced, I can proudly thank the Navy for providing the foundation of my education, professional life, and core values. The meaning for me is enormous even now, over the 18 years since I retired.”

His commitment to military personnel has not waned over the years, as Bruce devouts significant amounts of personal time to volunteer with Hero’s Bridge. He spends hours documenting oral histories of individuals who are served by Hero’s Bridge for the Veterans History Project of the American Folklife Center at the Library of Congress. 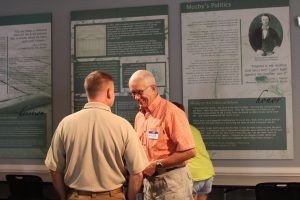 Plus, Bruce spends time each month visiting with veterans at the Villas at Suffield Meadows and is a member of Warrenton VFW Post 9835. Hero’s Bridge thanks Bruce for his years of military service and for his service to joining the mission and vision of assisting aging veterans. Hero’s Bridge respects and honors Bruce for all his has given and continues to give to this nation and those who have served.