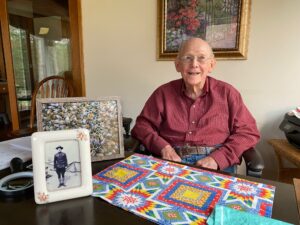 On Nov. 7, Army Veteran John Victor celebrated his 91st birthday. He was born in 1931 in the country near Monongahela, Pennsylvania. The family moved into town so that John could have access to a better education when he reached school age.

His father, a World War I Army veteran, was issued the town’s first driver’s license for a delivery truck and during the Depression, he hauled ice in the summer and coal in the winter. “He didn’t want the farm life, so he worked in the town,” said John.

His father then found work in a steel mill and remained there until retirement. John’s mother worked in a shoe store. John had an older sister who lived to age 92. He had a pleasant childhood and recalls happy memories on the farm with his pet dog.

On July 7, 1953, John responded to what he referred to as a sense of duty. “I wanted to serve my country. I graduated from Pennsylvania State University with a degree in international economics. After meeting people who worked for the National Security Agency as civilians, I enlisted in the Army Security Agency.” He was sent to Frankfurt, Germany until June 1956. Read the full story on the Rappahannock News website.