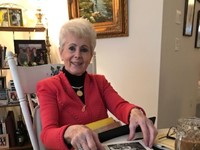 Born in 1937, Carolyn Mellon was one of five children. Her father’s life remained a mystery to the family. She knew only that he had spent the first half of it working as a Bobby or policeman in Scotland where he had five children with a previous wife. He came to the United States to better his life and pursue work in the police force here. Although they were never certain, Carolyn and her siblings suspected he was turned down because of his diabetes.

Her father found other work in a coal mine in Pennsylvania alongside a man named James J. Davis. Notoriously dangerous work, he paid dues to the local Moose Lodge fraternal organization as insurance for his family, which the family would unfortunately need. When Carolyn was only nine years old, her father died from heart disease and diabetes. The children were sent to live at Mooseheart Child City and School in Child City, Illinois less than 40 miles from Chicago. James J. Davis, the man beside her father in the mines, is credited as having founded the city and orphanage situated there.

Her mother suffered a breakdown after the death of her husband and was sent to a home to recover. The children thrived at Mooseheart. “We stayed together for the first six weeks during which we received a physical and testing to see what grade we were in. After that my brothers went to live in the boys’ hall and my sisters and I lived in the hall for girls,” says Carolyn. “Although I didn’t actually live with my sisters. I lived with girls my own age. I saw my siblings when we visited our mother,” she continued. She recalls that birthdays at the school were not enjoyable because they received their shots on that day. “I remember one nurse chasing me down the halls to give me my shot,” she laughs.

Carolyn graduated from high school in Child City and went to a neighboring town to study nursing. As she describes it, the choice was a four-year school or the three years of nurses training; “Three years was better than four, but I really found it to be my niche,” she explains. 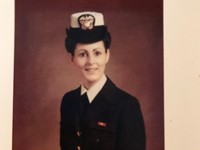 She graduated from the program after three years and found work at Copley Medical Center in Aurora, IL. before working at the Conrad Hilton and Palmer House in Chicago. Having been inspired by the Cherry Ames’ book about a flight nurse, Carolyn decided to pursue it as a career. “An Air Force recruiter came to visit me,” she says. “Unfortunately, I was turned down due to my age.” Carolyn was only 29, but too old to begin Air Force training. The next day she called the Navy and the next thing she knew, she had taken her oath and was off to Newport News for training. Her first orders were in Oakland, CA where she reported to the head nurse. The nurse took a look at her list and up at Carolyn and said, “You aren’t one of the Mellon kids are you?” The head nurse, Marcella Smith, was the same nurse that had chased Carolyn through the halls to administer her annual shots.

She worked at the Oakland Naval Hospital for three years on a 20-bed amputee ward. There she had to lift heavy patients in and out of beds. As a result of this arduous work, Carolyn required back surgery when she was in her early thirties. In 1969 she received orders that sent her to Naples, Italy for two years. There her work shifted from amputees to primarily hepatitis cases. 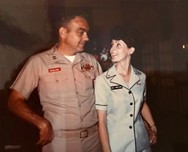 After Italy, Carolyn was stationed in Quantico where she met her husband Bud Kirkland in the early 70s. Carolyn ended her Naval career after ten years as a Lieutenant Commander. She and Bud made their home in Fauquier County where Carolyn found part time work as the outreach nurse at the Vint Hill Farm Station until it closed and at the Department of Rehab in Manassas.