A Boy Scout Makes A Difference to Ailing Veterans

Bryce Brooks has been a boy scout since 2009. Now, age 16, his dream of becoming an Eagle Scout is about to come true. The road to receiving the award is challenging and takes years to obtain. Eagle Scout contenders must uphold a leadership position, receive all the required merit badges and complete a project that serves his community. Brooks’ service project is designed to enhance the lives of several veterans in Warrenton, Virginia.

As Brooks thought about the endless possibilities for the project, his desire was to make a difference in his community by assisting veterans.

“I am so proud that Bryce has chosen this as his Eagle project,” Molly Brooks, his mother said. “It is a challenging project because it is outside the norm of what scouts often choose.”

Molly Brooks is president of Hero’s Bridge, a nonprofit organization that assists veterans 65 years and older with household chores, animal therapy, social interaction and financial assistance at no cost. Many veterans in the Warrenton area benefit from the services Hero’s Bridge provides.

“I had no idea an organization existed for older veterans, and I am very grateful,” Caryl Buck, Navy veteran and small farm owner, said “I can still manage my farm, but the extra help is good, almost like [having] a guardian angel.”

Hero’s Bridge offers a program called the Honor Guard. The program recognizes veterans for time served and celebrates these individuals by organizing ceremonies. Brooks decided to organize a ceremony for several veterans in his community for his Eagle Scout project. 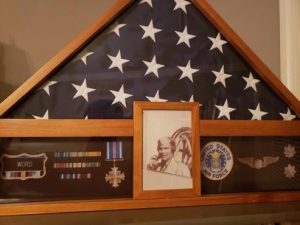 “I thought the best way to help them would be to show them [veterans] appreciation by making shadow boxes,” Bryce Brooks said.

Over the years, Bryce Brooks has volunteered with social events and service projects to assist Hero’s Bridge veterans. It has given him deeper appreciation for his family’s military background. Ultimately, his involvement with the organization led him to the basis for his Eagle Scout project. He plans to create shadow boxes for several veterans. Each shadow box will contain a flag, photos and medals as well as ribbons earned.

In early 2019, Bryce Brooks attended a social event for veterans in assisted living at The Villas at Suffield Meadows in Warrenton, Virginia. At this event, Brooks interacted with many veterans and got to know them personally. He discovered that some of the Suffield Meadow veterans served in the Korean War and Vietnam War, like both of his grandfathers.

Many of the Suffield Meadows veterans lost or never received their military awards and decorations. Additionally, each veteran lacked a place to display personal awards honoring their sacrifices made while serving in the military.

While thinking about his grandfathers, Brooks realized both men faced similar issues as the Suffield Meadow veterans. Neither of his grandfathers had shadow boxes, and both were missing some of their war decorations before their passing. Brooks made the decision to help veterans at Suffield Meadows receive due recognition for their service. He is in the process of obtaining the lost awards.

The project has to abide by the standards of the Boy Scouts of America. Before beginning, all Eagle Scout project proposals must be approved by scoutmasters and scout district leadership. Once approved, Brooks contacted Suffield Meadows to finalize his plans. 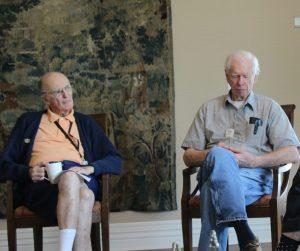 Photo courtesy of: herosbridge.org.
James Pride and Paul Infeld enjoy the monthly veteran social at The Villas at Suffield Meadows in Warrenton, Virginia.

Brooks spent countless hours investigating how to obtain unaccounted military awards and decorations for each man. As part of this process, Brooks is required to contact the military branch of service for each veteran while also requesting disclosure of military award records. The process is time consuming as each award has to be ordered separately. Brooks remains motivated by the reflecting on the meaning of the awards for each of the veterans. 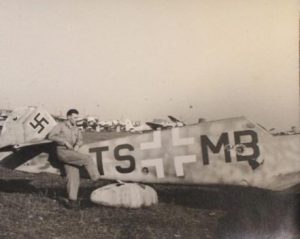 Bill Habden stands with an enemy plane while in Europe. Photo Courtesy of herosbridge.org.

Brooks intends to put the gathered awards in an individual shadow box for each veteran. He has purchased the shadow boxes from Hobby Lobby with donation money he personally raised. Brooks plans to present the shadow box and awards to each man in December 2019 in a ceremony at Suffield Meadows. He hopes his Eagle Scout project will be meaningful for each of the veterans and their families.

“I think it is great that Brooks wants to honor veterans in this way,” Jill Miller, staff member of The Villas at Suffield Meadows, said. “Throughout this process, Brooks has been great to work with.”

After the project goes through one final review, Bryce Brooks hopes to achieve the rank of Eagle Scout. His future plans include studying engineering and pursuing a career in the military.