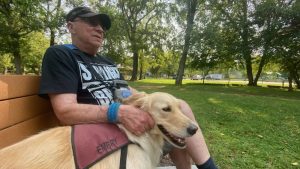 Vietnam Army Veteran, Nick Travis, had trouble assimilating to civilian life after spending nearly two years in Vietnam. “I had a lot of triggers,” he said. The Brooklyn resident returned to the Brooklyn in 1969, he didn’t leave the house for six months because he couldn’t tolerate the noise.

He recalled one incident when he was out with a friend and he heard a loud noise. He low-crawled into a nearby shoe store. “The shop owner asked if I was alright, I could only answer that no, I wasn’t.” Shortly after this episode, he called a ‘Nam buddy in West Virginia where he relocated to be surrounded by nature and experienced fewer triggers.

Six years ago his ‘Nam friend came down with agent orange-induced cancer and he wasn’t able to see him. He became overcome with survivor’s guilt. The guilt precipitated other negative behavior such as anger and flashbacks, although Nick doesn’t like that phrase. One night he attacked his girlfriend while she slept, “I envisioned North Vietnamese Army soldiers. I was lucky I didn’t reach for my weapon.”

At the time, Nick was in treatment for PTS. His girlfriend said it wasn’t working. “She had been rescuing greyhounds and she recommended a service dog.” One morning he woke up on the floor with one her greyhounds comforting him. She asked if I would try a service dog now.

Never being a pet owner, today, Nick finds his closest companion to be a five-year-old Golden Retriever named EMBRY, whose name is written in all caps to demonstrate her importance in any narrative. They were introduced in December of 2017. EMBRY is a service dog with paws4vets, a nonprofit group that has changed Nick’s life. She helps alert him when people are approaching, anchors him when he experiences anxiety and assists with nightmare interruption.

Today, Nick is an advocate for paws4vets and the therapy that can be received from the care and attention of a pet.