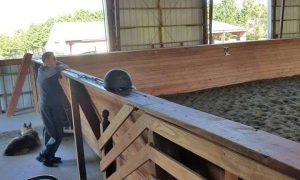 By the time Tony Pullen celebrated his 18th birthday he was a skilled horseman. He credits his horse management to the summers spent training racehorses on his grandfather’s farm in Rhode Island and later working alongside his cousin on a horse farm in Orange County.

Both his father and uncle were in the Air Force, and after high school Tony followed in their footsteps, looking sharp in his crisp blue uniform. He served for 13 years in special operations. Read the full story in the Rappahannock News.