Veterans and Experienced Runners Commit to 12-Marathons in 2021 to Raise $26,200 for Hero’s Bridge Veterans Village

Bobby Brooks on the Greenway in Warrenton.

Bobby Brooks and Rick Heppard recognize the challenges everyone faced in 2020, but they focus their attention on the veterans, specifically the Vietnam Veterans. “2020 was the 50th Anniversary of the Vietnam War and many commemorations and memorials that were supposed to happen were cancelled due to the pandemic,” they said in a joint statement. Vietnam Veterans were finally being recognized for their war efforts and what our country asked of them over half a century ago.

Vietnam Veterans suffer from PTSD, fractured relationships, and a growing list of ailments that are a direct result of Agent Orange exposure; today that list includes 14 severe diseases.

With 2021 being the 30th Anniversary of Operation Desert Storm and the 20th anniversary of Operation Enduring Freedom, where Brooks and Heppard served, respectively, they have taken on the challenge of running one marathon, 26.2 miles, every month this year to honor those who served and did not return home to a hero’s welcome or return home at all.

Brooks and Heppard, a Hero’s Bridge Board member, will give all donations from their efforts to the Hero’s Bridge Village project that will offer housing to our most marginalized aging veterans.

Due to COVID-19, the duo plans to run a mix of marathons and virtual runs throughout Northern Virginia and neighboring states.

The Hero’s Bridge team looks forward to seeing their progress and cheering them on. Those interested in supporting their efforts can visit the Running for Heroes campaign to sponsor one run for $26 or make it recurring to sponsor all their runs. 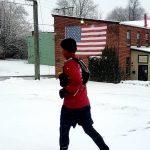 Marathon #1
The first of a dozen took place on January 31 on the W&OD Trail in Northern Virginia. Temperatures that day were 20F at the beginning of the run and warmed up to just 35F by the end.

For both, the run was better than anticipated considering neither felt they had enough training. With regards to running, the men cast egos and personal records aside and focused on logging their mileage on Virginia’s country roads. With concerns of have eleven runs to tackle, their health, safety, and sufficient training was foremost on their minds.

Q&A
How are you keeping hydrated and taking in calories? Bobby: “We carry GU to maintain energy.” Rick: “For this first run we ran past our car at the halfway point and had warm chicken broth waiting for us,”

Do you stop along the way? Bobby: “Yes, we stop along the way when we needed to eat, drink or just rest. The challenge is not about me personally, so I don’t care about finish times.” Rick: “We are in this for the long haul, so we aren’t trying to break any speed records. As the weather improves and our endurance builds back up, we’ll shave off time naturally.”

How was your pace? Was that pace typical of your running? Rick: “I think our pace was pretty good, we started a little faster than we had thought we would, the first few miles in the 9:30s, but we adjusted and slowed it down as to not burn out to soon.” Bobby: “There are a lot of things to take into account as far as fueling and pace, so I think we did a good job balancing them.”

Any other factors? Were you both in good health for this run? Bobby: “I felt great! I was rested and motivated with a healthy nervousness. The cold, just like the heat, is always a concern. I have been running for quite a few years now so I kind of have the dressing in layers down to a science.  If I find something that works, I stick with it.” Rick: “I was feeling pretty good. I thought I would feel colder, but I had bought some new long running pants and they seemed to do the trick. I did add an extra layer of socks to keep the feet warmer for the second half. I hope I feel that good for the next one.”

How will you be selecting your runs? Will you run the same course more than once? Bobby: “I am interested in races that give to other charitable causes. Hopefully, we can find veterans causes but as long as we are helping others and bringing awareness to our cause that is all that really matters. We have selected a marathon in Gettysburg, PA that supports veterans so we will be doing that one in April. We probably won’t run the exact same course twice. I get bored doing that so hopefully we will be able to mix it up. Rick: “We are hoping to mix up the locations of the virtual races some, and hopefully get one or two in person races too. We do get tired of running around the hills of Warrenton all the time.”