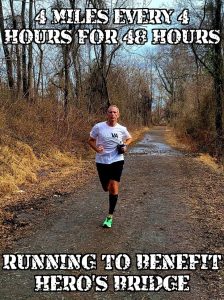 Operation Desert Storm veteran Bobby Brooks is half of the running duo called Running for Heroes. The two are raising $26,200 by running one marathon every month during 2021.

The money will be donated to the Hero’s Bridge Village, a planned community for marginalized veterans age 65 and older.

Earlier this month, Brooks stepped up his effort and embarked on a 4x4x48 challenge. Beginning at 11 p.m. on Friday, March 5, he ran 4 miles. Four hours later, at 3 a.m. he got up and ran another 4 miles. And so, on every four hours until 5 p.m. on March 7, at which time Brooks had run 48 miles over the course of the weekend. Read the article.