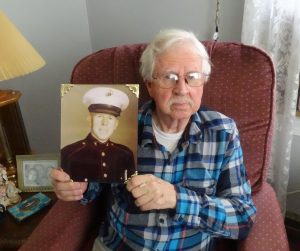 Kenneth Moore served as a radioman for the US Marines during the Vietnam War. He enlisted on January 15, 1964 out of Baltimore, MD and was sent to communications headquarters in Cherry Point, North Carolina. This was in large part due to his amateur radio hobby. While in high school, Moore got his amateur radio license and learned Morse Code. In July 1965, he began a 12-month tour of Vietnam. “We shipped out of San Francisco. It took us 27 days to get there. We stopped in Japan and Hawaii for refueling.”

Moore spent the next 12 months on the front lines fighting Viet Cong, “Day and night, we watched for the VC.” His role as a radioman required him to call in the MedEvac to get the wounded out, request back up, and report locations to make corrections. Moore talked to everyone. He was “in the soup”.

He says very little about friendships during his tour. “I didn’t have time to make friends, I was being shot at day and night”. He never saw a newspaper, heard a radio broadcast or saw a television. But he did correspond with people back home through the mail. “I wrote to my high school principal and he would read my letters over the PA system to the students.”

During his 12-month tour, he had five days R&R in the Philippines. On day six, he returned to the front line.

He left Vietnam in July 1965 and finished his service in Camp Lejeune, NC. “I remember the day my service ended. North Carolina had a record 18″ of snowfall and we drove out of the camp in it.” Having grown accustomed to sleeping on the hard earth, he placed a quilt on the floor of his childhood bedroom to sleep each night.

For the next 15 years, Moore would suffer nightmares from his 12 months in the jungle. Following his service he used the GI Bill to get trained driving tractor trailers and he returned to his amateur radio hobby. Of his service, Moore says it made him a better person. “I played my part and I did my duty.”

Kenneth Moore was interviewed by Jennifer Bowman who served in the U.S. Air Force from 1980 – 1987 as a Russian Cryptologic Linguist and was stationed in West Berlin, West Germany and then at the National Security Agency. His full biography is recorded with the Library of the Congress.