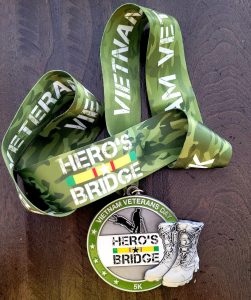 Running for Heroes finished their third marathon this weekend in recognition of Vietnam Veterans Day on March 29. Their goal is to run 12 marathons in 2021 to raise $26,200 for the Veteran’s Village.

“Overall, our time is staying pretty consistent. I felt the miles in my legs today, more so than the last two runs, but not a bad sore. The weather turned out to be not as bad as they were forecasting,” shared Rick Heppard. “Yes, it rained, but it wasn’t a down pour and we only heard one rumble of thunder early on. So, I consider it a weather win,” he added.

“The route that we ran was a little harder than previous runs which make for a little more soreness but actually I always expect a little of that,” said Bobby Brooks. “Although the weather wasn’t the best, I have run in a lot worse, so I don’t think the weather played a big part in the run. Really the best part of this run was running the Hero’s Bridge 5k, 8.46 times,” Brooks said.  “What a great way to do the virtual race for National Vietnam War Veterans Day,” he added.

Hero’s Bridge team members were there to cheer them at the finish. “It means a lot to have them out there. Even in the questionable weather,” said Heppard.

The team had to make up the course as they ran. “We learned that the Greenway was partially closed, and we wanted to stay close to where our start in case we anyone wanted to join us for a few miles,” said Heppard about the unplotted course. 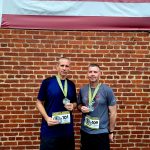 Fundraising has slowed down a little since the 4x4x48 challenge Brooks ran a few weeks. “The fundraising really goes back to people understanding the issues aging veterans have and donating to help make changes,” said Brooks.

“We still have a long way to go but I’m hopeful Running for Heroes and Hero’s Bridge can continue to communicate this message to the community and encourage donations. I’m optimistic!” Heppard added.

Next month, Running for Heroes will take the show on the road and see how they fair in their first in-person race in Gettysburg, PA. “I am excited for next month; this will be my third Gettysburg marathon. It is a nice course, and it will be refreshing to have an in-person race,” said Brooks.

Donate to their effort.