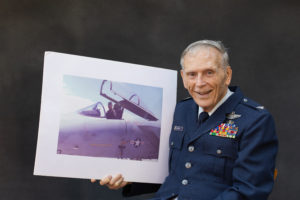 The year was 1967. Rick Koehnke was executing his ninth Air Force mission to take down the Paul Doumer bridge in Hanoi, the capital of Vietnam, which would off a major route for communist troops and supplies.

He remembered, “We were sent into the ring around Hanoi. There were 16 aircraft; I was third. After attacking the AAA [antiaircraft guns] sites at the end of the bridge, I was flying at 550 knots, 1,000 feet off the ground with antiaircraft missiles shooting at us. And all I kept thinking was, ‘Their aim is off.’ It’s incredible the things that went through my mind in those moments. All those AAA and missiles exploding above me went past me!” Read the story.