Paw Patrol Program Goes Above and Beyond 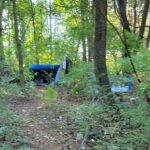 Paw Patrol coordinator, Kayla Johnson went above and beyond for a homeless veteran and his two dogs, a Jack Russell named Rascal and a Boxer named Susie. Navy Veteran, Jim, had to sell his home in June 2021 to pay his bills. He moved into a motel with his two dogs. He divided his time among several motels for one year, eventually depleting his financial resources. He then sought assistance from several community organizations, which enabled him to remain in motels for several more months. Last month, Hero’s Bridge learned that Jim and his dogs had exhausted their resources and taken up residence in a tent behind a local big box store.

He relied on the generosity of others and had access to a grill, fresh water, and a steady diet of canned food. He used a nearby gym to shower.

Alerted to the situation by our Paw Patrol coordinator, Kayla visited Jim and noticed that one of the dogs had a severe skin condition and wanted to have the dog examined. While many people can simply schedule a visit and bring their pet to a veterinarian, Jim’s lack of transportation and funds made this more of a challenge.

Kayla worked with our team of volunteers and secured transportation for him. She also arranged for an exam at Clevenger’s Corner Veterinary Care. The cost was covered by the Culpeper Humane Society’s medical assistance program. The dogs received their rabies vaccines and prevention medicine for fleas and ticks and one dog received antibiotics for his skin infection.

Kayla and her husband, Jesse, paid one more visit to Jim a few weeks ago. While at dinner one evening, they ordered two extra main courses to bring to Jim and several bags of groceries for both him and his dogs.

Hero’s Bridge will continue to work with Jim to make sure he was safe as we move into the colder months and has everything he needs to remain healthy while he continues to secure permanent housing.