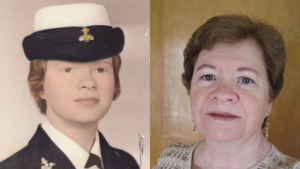 While all eyes were on the Vietnam theatre in 1971, the Russians hoped to take advantage of the situation and trained their scopes on the eastern United States’ coastline. Aware of Russian interests, Naval Weather Aerographer, Peggy Hembree, stationed in the Icelandic Arctic Circle, watched for Russian Submarines making their way for the United States.

“Tensions were high between the United States and Russia. My job was to make sure that we didn’t relax our defenses against a Russian attack while our resources were in Vietnam,” said Hembree.

Today, Hembree remains proud of her contribution to the safety of the American people back home against Russian attack.

Hembree firmly believes that the military is an advantageous starting point for any young adult. “Young military personnel are paid as they train to learn a specialty. They also learn respect and work ethic.”

Hembree once was that young adult looking for a that starting point. “I wanted to go to college, but the money was never there,” she recalled. “I saw the military brochures that advertised offering an education. So, at age 24, I enlisted in the Navy in 1971,” where she was trained as a Naval Weather Aerographer plotting maps by hand. Today this job is mainly performed by satellite imagery.

Ironically, Hembree seemed to have followed in her father’s footsteps who was a meteorologist in the Great Lakes region during WWII. The day after he was ordered to the Sea of Japan, the first bomb was dropped. Having been drafted, he fulfilled his two-year obligation in Galveston, Texas. After his military commitment, he relocated the family to Washington, D.C. where he worked with a team that helped identified patterns in the jet stream.

During her six years in the Navy, Hembree was stationed with scientists studying the ocean. She feels lucky to have served with the scientists; “Some men did not want women in the military, and they let that be known, but the military was unable to fill military bases because everyone was in ‘Nam,” Hembree proudly stated.

Hembree believes that you get what you give. “I maintained a professional attitude throughout my military career and in return, I was treated professionally.” Because of the classified data that Hembree worked with, security was always nearby.

She spent two years in Iceland, during which the base was stormed, and a volcano erupted.

“The Icelanders wanted the United States to defend its fishing boundaries against Norway that continued to encroach on fishing space. The U.S. didn’t interfere with NATO nations, so the locals thought their only option was to storm the base,” she said. “I’m not sure they had weapons other than whale harpoons,” she added jokingly.

“Women weren’t trained to use weapons, so we had to stand watch. If they stormed the base and took our supplies, we weren’t sure how we would have gotten new supplies. In the Arctic Circle, resources were limited,” she said.

When a volcano near Myvatn erupted everyone was put on alert. Hembree had to plot the fallout and direction that the ash cloud would travel. She also spent time on the observation point on tsunami watch.

She recalled relaying information to her Captain about the direction of the fallout cloud. “He didn’t believe the data, but I was right,” she said confidently.

Her assignment moved her south to a much different climate following Iceland: Bermuda. “It was hot and very busy,” she said. There she provided oceanographic data to catch submarines heading toward the Gulf of Mexico.
Once a submarine was located, Patrol P3 squadrons would drop a metal buoy in the water and listen for sonar radio transmissions. The strength of the transmission indicated the size of the submarine.

There were submarine tracking bases every few hundred miles along the coast.

Hembree is proud to see the posts that women command today in the military. “They didn’t think the women would stay,” she said. “I’m glad women proved everyone wrong,” she added.

Thanks to her service, Hembree earned that college degree she so eagerly wanted. She went on to become a teacher and spent time doing mission work. Today, she author’s novels in her retirement. To see her work, click here.