Marine Corps veteran wants all veteran graves to have a wreath 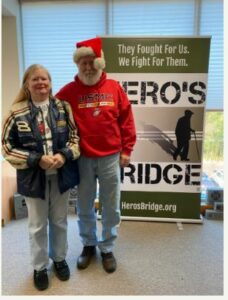 Marine Corps veteran Lewis Ray was the first person in his family line to join the military, but in his extended family, there were many military members, some predating the Civil War. They are all interred at Ray’s hometown church, Providence Baptist, in Kershaw County, South Carolina.

On December 17 at Culpeper National Cemetery, Ray stood beside nearly 1,000 other community members to lay wreaths at veteran graves as part of Wreaths Across America’s mission to Remember, Honor, and Teach. It was his honor to do so, but for him, it wasn’t enough.

“All veterans, no matter where they are buried, should be remembered,” said Ray.

To this end, Ray has covered the cost of materials to have wreaths laid at the headstones of 22 veterans interred in the Providence Baptist cemetery where Ray’s family members are buried. Lost church records may have revealed family members that predate the Civil War and whose graves remain unmarked.

The greens for the wreaths will be clipped from his family farm in Kershaw with the help of volunteers.

Ray himself served during the Cuban Missile Crisis and then again during the Vietnam War.

As a private, he left New York on December 17, 1960, on an MTST (Military Sea Transportation Services) ship that docked in Guantanamo Bay on Christmas Day. As he disembarked, he heard a bugler playing “Here comes Santa Claus.”

Two years later in October 1962, he was called to the Navy Base and given a top-secret cryptogram order from the Secretary of Defense and then President Kennedy announcing the 0600 naval blockade around Cuba to prevent Soviets from bringing supplies to nuclear missile sites.

The order was for all military personnel to vacate the area pending the unknown response from the Soviets about the blockade and the threat of nuclear warfare.

Six years later, Ray found himself in Vietnam having again answered the call of duty. He was wounded at the Tet Offensive where his biggest risk, due to the hot and humid conditions, was an infection.

Ray took Vietnamese language lessons from a teacher who spoke a North Vietnamese dialect. “This was done deliberately in case I was shot down and captured by the North Vietnamese I would be able to communicate,” he said.

Not long after his deployment, an aircraft of marines was shot down and lost. He was told he was going back to Vietnam for a recovery mission.

He had only days to update his vaccine card. “I needed 13 shots that were divided up among my arms and buttocks,” he said. Among the shots was hemoglobin. “If you got nothing else, you got this one. It helped you coagulate if injured,” he said.

Ray buried 25 brothers-in-arms when he returned from Vietnam.

On December 21, Ray laid an additional wreath on his mother’s headstone. “I will be one of the next family members to be buried in that cemetery. That wreath was for me.”