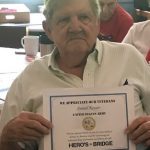 In celebration of Independence Day, on July 3 Hero’s Bridge coordinated a pinning ceremony with two of its members at the Rappahannock Senior Center.

The veterans were invited to stand and share their service memories with the group. They were given a pin and certificate from Hero’s Bridge that read “We Appreciate our Veterans.”

For both Army veterans recognized during the ceremony, humility reigned, and neither wanted to share their experiences; one simply stating that he served stateside and the other that he served in the Korean War. 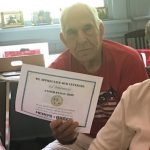 Following the brief ceremony, seniors in attendance were invited to share their service stories from either personal accounts or those of family members. Below is a list of military connection from the seniors in the attendance.

Hero’s Bridge Honor Guard provides special ceremonies to honor our region’s valiant individuals. Whenever possible, Hero’s Bridge includes local youth organizations in honoring these heroes. providing the new generation with an experience and education in gratitude, respect and value of our service men and women. To our servicemen, we thank you.

Watch social media for the next scheduled pinning ceremony.