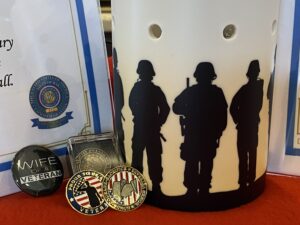 On Friday, Nov. 4, representatives from Hero’s Bridge in Warrenton visited residents and staff from Poets Walk Warrenton to conduct a pinning ceremony for veterans living at the facility. The ceremony began with a presentation of colors from the Liberty High School Junior ROTC.

Fourteen veterans, including one female Navy veteran, live at Poet’s Walk, a memory care facility. The veterans served in four branches of the U.S. military — Navy, Army, Air Force and Marines — during the Vietnam and Korean wars. Two served in both wars.

Hero’s Bridge volunteer and Navy veteran William Benner read the name of each veteran, who then received a pin and certificate presented by Hero’s Bridge staff.

The presentations were met with mixed emotions. One veteran from both the Vietnam and Korean wars had tears in his eyes as he received his pin. Others sat stoically, revealing little emotion. A round of applause accompanied each name. Read the full article on Fauquier Times.