Heroes among us: Caryl Buck paved the way for women in the U.S. Navy 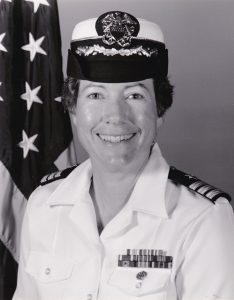 Caryl Buck was born in 1951 in a suburb of St. Louis, Missouri, the second child of a McDonnell Douglas engineer and pipe organist. She was born in an era when the roles for men and women were clearly defined and showed little signs of changing. Caryl would challenge these traditional roles and, in the process, blaze a trail for every woman to come after her in the U.S. Navy.

Career options for women were limited following high school graduation. Most attended secretarial school or went on to become teachers or nurses, only to marry and then focus on caring for their families. Buck had other sights in her scope. As a young woman, biology piqued her interest. As young as age 3, Buck would walk beside her father working in his garden, popping pea seeds into the ground. At age 5, he found her carefully planting small pebbles in a row like peas to grow boulders; “I had a fascination with rocks at the time,” smiled Buck at the memory.  Read the full story.