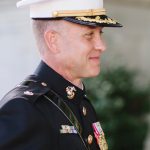 Dave Benhoff was drawn to military service through his sense of patriotism and “wanting to see more than a little farm town.” Reading the history of those who served before was inspiring to him. Dave has always enjoyed old war movies and appreciates  the “bonds between military folks who served together in difficult situations.” He recalled his sense of wonderment as he read a lot about the Navy and Marines in the island campaigns, “I was just in awe of what they overcame and accomplished.”

Military service benefitted Dave on a personal level. “Overall my service was a character builder. Mettle was tested through adversity and tough living,” he said. “It taught me how the human mind and body can take much more than one would think. I learned to just keep putting one foot in front of the other and continue marching on.”

Dave also said in retrospect, “The things we did seem superhuman as I’ve grown older…I wish I had appreciated it more back then. It also taught me how to really, truly work together as a team. When lives are on the line, it makes you realize how important it is to work together, and not let petty issues like personality, etc, interfere with getting the job done.  You just get it done.”

After retiring from military service, Dave became a government contractor for the U.S. Department of State for a year before he realized he wanted to do something more meaningful. “I wanted to work where I felt I was meeting a need,” he said. “So, I went into hospice, where I specialize in ensuring veteran patients’ special requirements (given their unique experiences) were being met as best as possible.” 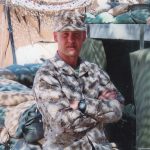 Today, Dave remains committed to hospice services and veterans. His profession led him and a co-worker, Molly Brooks, to create a nonprofit organization, Hero’s Bridge, dedicated to veterans age 65 and older. They found these older heroes have a unique set of needs. Dave served his nation well but he also continues his service — this time within his community. His dedication to respect, honor, and integrity is truly amazing. Dave Benhoff, thank you for your service.