All photos courtesy of Chaplain McAlexander

After graduating Topeka College of the Ministry in 1978, McAlexander spent many years serving his home church and students as the Dean of Students at Christian Heritage College. In 1986 he was, however, called to serve in military ministry, began active duty in August of 1988, and received his first orders to the Third Battalion, MCRD, Parris Island.

Throughout his military career McAlexander “enjoyed bringing the presence of the divine into situations, which in some cases were the farthest thing from the divine. The presence of the Chaplain can bring a different perspective into the situation and change everything. Chaplains help people come to faith and mature in their faith. They are there to help people make decisions. Sometimes it is making a decision not to do something that would adversely affect them. The consequences of such decisions can affect them the rest of their lives.” 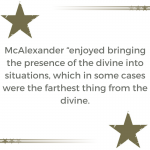 Although McAlexander is now retired from active duty, he still serves. In 2015 he became the Executive Director of the Chaplaincy Endorsement Commission for the Christian Churches and Churches of Christ, which has pastoral oversight for all the military chaplains from his faith group. It is a worldwide endeavor. He manages chaplains serving in Germany, France, England, Japan, Iraq, Afghanistan, Poland and all over the United States and belong to every branch of the U.S. military. “Retention and resiliency” are the military terms he stands by and he is dedicated to “being there, not only for our service members but for his Chaplains as well].”

He said the most important part of his service while serving as Chaplain in the military was how he helped to “change lives.” Chaplain McAlexander to this day follows this motto. Sir, thank you for your service and dedication to the nation and for your faith and devotion. 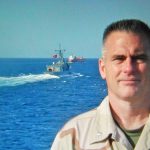 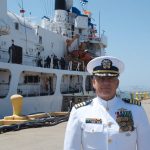