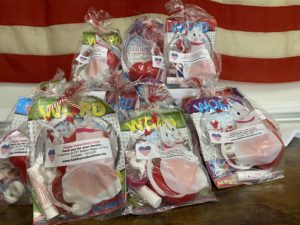 This year Hero’s Bridge received a generous donation of gift bags to distribute to our veterans for Valentine’s Day. In appreciation of this kind offering, we would like to introduce Bobby’s Valentines to Hero’s Bridge supporters.

Bobby Bager wasn’t an athletic child, despite his mother’s best efforts. “I enrolled him in everything, including fencing to help him find an activity that he enjoyed,” Patti, Bobby’s mother, said.

When a friend told her about the Civil Air Patrol cadet program, she made sure to bring Bobby, who was 12 years old at the time. The Civil Air Patrol is an official civilian auxiliary of the United States Air Force. The mission of their cadet program is to transform youth into dynamic Americans and aerospace leaders. This was Bobby’s first introduction to the military.

“I told Bobby that if he liked it to let me know and I would bring him to the next meeting. He was ready and waiting by the door at 5:30 the following week,” said Patti.

He loved the program, the uniforms, the ranks, and the camaraderie. Bobby excelled, winning awards, and rising through the cadet ranks. He was so passionate about the military, he wanted to get in immediately following High School. “I encouraged him to go through a college ROTC program and be commissioned as an officer,” his mom said. Bobby earned a history degree from the State University of New York at Brockport in 2002. He spent a year training in Fort Knox and in 2003 he joined his unit in Germany and began the process of deployment to Iraq where he stayed for one year.

Bobby returned to Germany in 2004 and one of the first things he did was to call his father to let him know that he had brought all of his guys home. “He was so proud of the men in his unit,” said Patti.

His family visited him in Germany in 2004 and by 2005 he was preparing for another deployment. While en route to a training site in Germany, Bobby was critically wounded. His mother believes he was arced by electrical lines and electrocuted. Bobby suffered burns over 70% of his body. For three and a half months he fought for his life in a San Antonio hospital before dying. 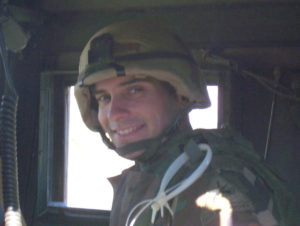 Following his death, his parents learned a lot about their son. His heroism, his loyalty to his men, his leadership, and even his storytelling. “His friends said he could take a simple occurrence, make it a funny story, and have his friends laughing,” she said.

As an officer, he didn’t need to sit in the cold with his men. “He could stay warm inside with coffee, but once when one friend looked for him, he was found standing beside the men in his unit in the cold beside a bonfire telling stories to make them laugh and keep them distracted,” she recalled.

Bobby understood life well for a man of his age.

“He asked me to send him movies and books from home,” said his mother. Bobby loved to read and knew what it was like to be lost in a book. He had his men watch Band of Brothers together. “Following his death, a man from his unit told me that they were a band of brothers because of Bobby,” said Patti.

A few years after his death at a weekly Sunday meal at his grandmother’s house, Patti mentioned wanting to do something to remember Bobby. After a brief conversation, the idea of distributing Valentine’s came up.

The first few years were spent sending Valentine care packages to friends Bobby had who were still deployed. When those connections ran out, Patti reached out to two other Gold Star mothers who put her in touch with the local Buffalo VA. She spent the next several years distributing Valentines to veterans at the VA.

When COVID struck, they could no longer hand out Valentines and Patti began researching veteran organizations when she found Hero’s Bridge thanks to our May 2021 EPOCH Times article.

The Valentine’s bags include cards made by local school children, small gifts, and candy; a touching legacy for a young man whose life was tragically cut short.

Hero’s Bridge is grateful for the sacrifices of the Bager family, and we thank Capt. Robert Bager for his service.

And today, Valentine’s Day, we wish him a Happy 42nd Birthday.

To donate to Bobby’s Valentines.