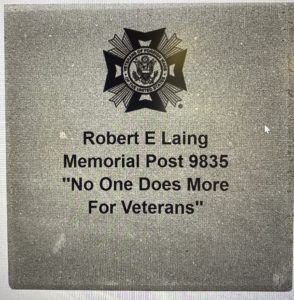 On May 19, 1948, 90 local World War I and II veterans banded together as Charter members of the Fauquier County Veterans of Foreign Wars Post 9835 in Warrenton, Virginia.  In April 1974, the Post was re-named in honor of WWII veteran (and past Post Commander) Technical Sergeant Robert E. Laing.  While existing for nearly three quarters of a century, the Post (unlike other County Veterans Service Organizations) has never been able to obtain its own building and today meets at the Warrenton Police Department Training Center.

Like more than 6,000 other VFW Posts around the World, Post 9835 honors fellow veteran Laing’s service by looking out for veterans who served overseas at the potential risk of life and limb. The Post is currently comprised of over 270 male and female veterans, residing mainly in Fauquier County. All five service branches are represented by members who served in conflicts from World War II, Korea and Vietnam up to the most recent conflicts in Eastern Europe, the Middle East, and Afghanistan.

Post members are probably best recognized for participating in the VFW’s annual Buddy Poppy Program. For more than a century, the poppy has become synonymous with the sacrifices made in combat by America’s veterans.  The use of the poppy dates from World War I and takes its name from Lieutenant Colonel John McCrae’s poem In Flanders Field.

Standing at a number of locations in Warrenton during the two annual drives, Post members raise anywhere from $8,000 – $10,000 or more annually from generous citizens. When the Post had to unexpectedly alter its sites one year, citizens went looking for them to get their Poppies. Over the three day Veterans Day weekend last year, Post members donated nearly 150 hours and handed out more than 1,200 Poppies to local citizens.  Funds raised from these efforts (during the Memorial Day and Veterans Day weekends) are returned to the community in many ways (none can be used for administrative or operational expenses).

The Post’s community work is extensive:

The Post donated funds to permit the Town of Warrenton to purchase new American Flags for display on Main Street during holidays.

In 2018, the Post celebrated its 70th anniversary and received a congratulatory letter from Senator Mark Warner, marking the occasion. In the letter he writes:

Since 1948, VFW Post 9835 has served veterans, military families, and the local community. As a testament to your exemplary service, I understand that you have earned All-American Post honors five times, including 2016-2017. Abroad you have borne the burden of battle for our great Nation, and at home, you have strengthened our communities. I am humbled by your commitment to service and thank you for the sacrifices you have made to protect the freedom of all Americans.”

What’s In a Name?
Robert E. Laing was born August 11, 1914; one of four children raised by a single mother in Fauquier County.  His father, Zachariah, whose name is spelled Lang in the 1930 census, was listed as a farm laborer. Laing senior died at age 58 in 1938 from a punctured lung due to fractured ribs after being hit by an automobile.

The 1940 census shows Robert E. Laing’s address as Waterloo Street, Warrenton. He was, at the time of the census, working as a painter with the Warrenton Supply Company earning about $450 a month. His enlistment date is recorded as May 13, 1941 as a Private.  He was honorably discharged following World War II as a Technical Sergeant T-5.  Other records of his service could not be located.

Do you know anything about Robert E. Laing and his military service? Are you related to him?  Let us know by emailing outreach@herosbridge.org or CDRPOST9835@VFWVA.ORG

Honor Your Veteran with a Brick