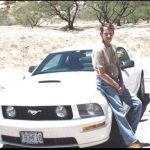 Kim Townsend is commemorating two family members with bricks at the Hero’s Bridge Veterans Village. The first is for her husband, Tim, a retired Army veteran who passed away in February 2010 from lung cancer.

“He served in Desert Storm,” said Townsend. Proximity to the oil fires, set by Iraqi armed forces produced dense cloud of soot, liquid, aerosols, and gases have led to chronic multi-symptom illnesses in many veterans who served in that first Gulf War.

Married for only thirteen years, the couple was encouraged to earn their college degrees by their son-in-law. “He told us it’s never too late to go to college,” said Townsend. They attended history and writing classes together with plans to author books following their respective graduations.

Unfortunately, the month he was scheduled to graduate, Tim was diagnosed with lung cancer. “After Tim’s death, I lost interest in publishing,” said Townsend whose career took her in a different direction. 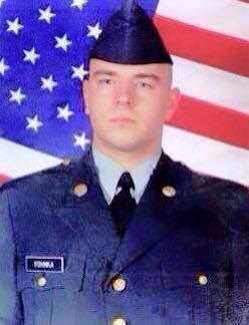 Her son-in-law and inspiration for returning to school, Grant Yohnka, was married only three days when he took a fall while on active duty. “He and my daughter, Amber, were moving his items out of the barracks. They were carrying a couch when he fell,” recalled Townsend.

It turned out that it was more than just a fall; Grant had a seizure and when he was examined, a large inoperable brain tumor was found. “He died five months later,” said Townsend.

Amber, who struggled following his death, is today a Visiting Angel in the healthcare industry and works with patients prior to hospice care. Grant died in July 2002 at only 21-years-old.

“Being involved with hospice care for Grant helped me learn what to do for Tim when became sick,” she said.

Kim Townsend supports the Veteran’s Village, “When you get to the end of your life, you realize that it is not material possessions that matter. Giving veterans a safe place to live with just the right about of space, allows them to focus on what’s important during the last years of their lives. Honoring Tim and Grant who both were taken much too soon means so much to me. They both would have loved the concept of this Village and now they will forever be a part of it.” 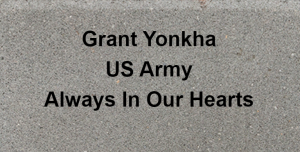 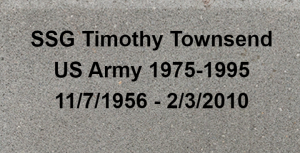