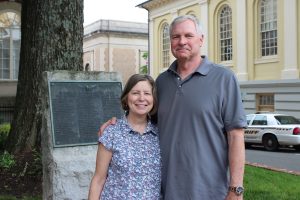 Phil Kasky, Captain, USN (Ret) and his wife, Mary, one day attended a December 2016 holiday event at Warrenton VFW, Post 9835. During this event, there was a presentation by two local residents, Molly Brooks RN-BC, CHPN, and David Benhoff, LtCol, USMC (ret). Phil and Mary, along with many other families and VFW members were at the VFW for this holiday gathering.

Kasky shared what he heard at the beginning of the presentation: “In Molly’s opening remarks about our aging veterans Molly said, ‘They fought for you. Will you help us fight for them?’” Kasky noted the Hero’s Bridge co-founder provided an overview on why Hero’s Bridge was founded, and what they do. “They [Hero’s Bridge] sought to offer services to veterans needing some help, to perhaps assist with replacing lost military records and medals, maybe offering small construction services such as assisting with installation of wheelchair ramps to their homes. Sometimes Hero’s Bridge can help veterans in emergencies to help pay for a heating bill in the winter,” shared Kasky.

Molly presented information on the Hero’s Bridge program Battle Buddies, which pairs aging veterans with younger counterparts who help assess the needs of the older person, assist with services such as transportation to appointments, arrange hospital visits, provide companionship, and who are available to the veteran during critical times.

“Molly and Dave’s comments resonated with us, especially the importance of Battle Buddies and how together, we might make a difference in an old veteran’s life,” said Kasky. “Mary has been by my side through my entire 27 year military career and together we have lived the highs and lows of military life.”

Kasky and his wife have first-hand experience with the “daily struggles military families often face, especially during long deployments.” He shared, “Those struggles often continue when a veteran leaves active service. They may experience anxieties that can come from sudden lifestyle changes.”

Kasky noted many veterans struggle with adjusting back to civilian life, and that struggle may last for a significantly long time, even into the “golden years.” He also said, “Loneliness can be a battle as well…lengthy military deployments statistically leads to higher divorce rates for service members. And battle scars can exist not only physically, but emotionally too. Veterans may be suffering from battlefield trauma that can cause Post Traumatic Stress Disorder (PTSD).”

Armed with his knowledge and what he learned about Hero’s Bridge programs for senior veterans, Kasky and his wife began the journey of becoming a Battle Buddy. They were paired with a local Vietnam veteran, Peter, who is 87 years old and suffers from a multitude of maladies due to his exposure to Agent Orange, a chemical which causes major health problems to individuals who were exposed in the Southeast Asian environment.

“Peter was an army chaplain and witnessed far too many battlefield deaths, which has led to two significant PTSD episodes that continue to haunt him to this day,” said Kasky. “At his advancing age, Peter doesn’t drive and has no reliable means of transportation. His wife is deceased and his two adult children live on the west coast. So Peter lives alone and feels somewhat isolated in his small apartment. In short, Peter is lonely and needs companionship.”

Kasky and his wife’s Battle Buddy experience has impacted their lives: “We feel it is both a duty and a joy to help Peter, and even the smallest of things can make a big difference to an aging veteran such as Peter who no longer has the mobility of a younger man. Mary and I visit Peter weekly, we make occasional grocery runs for him, help with errands and assist with local transportation needs.”

Kasky and his wife are honored to help their Buddy in this last “phase of his life.” Kasky also shared that “Hero’s Bridge needs volunteers to help in this mission.” Both he and Mary encourage others to participate in the Battle Buddy program because it is a fulfilling experience for all involved.